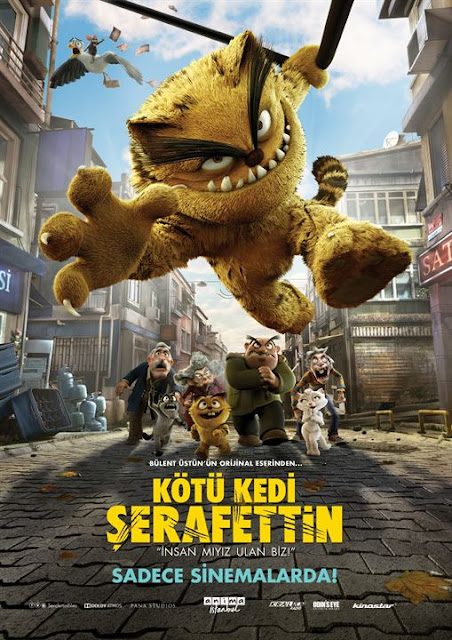 Sinopsis Film Bad Cat (2016):
Produced by Turkey's biggest animation studio, Anima Istanbul, The Bad Cat is an animated epic for young adults featuring the unforgettably bad cat, Shero and his foul mouthed gang in action. As animals inhabiting streets Shero and his friends are after what anyone else in their notoriously sleazy Istanbul neighborhood wants: debauchery with girls, food and the occasional drinking binge. This ordinary looking day will prove otherwise as their paths cross with humans, things get a little out of hand in hilarious, harsh and unexpected ways.

In a sleazy downtown area of Istanbul, Rifki the Seagull and Riza the Rat are preparing for the mother of all parties hosted by Shero, a hot-blooded, sex-crazed alley-cat. Their night of booze, babes and BBQ is thrown into chaos, however, following the unexpected arrival of Shero's illegitimate, but ever-so-loveable son Taco, along with the accidental death of a sweet, innocent housebound feline who was the object of Shero's affection. With the dead cat's owner hell-bent on avenging her death, Shero must face being a father, defeat the crazed lunatic and still leave time to fall in love before his nine lives become none.

Related Posts
Animation
Beranda
Give us your opinion
Load comments