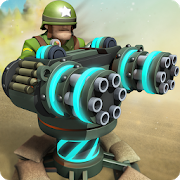 Alien Creeps TD is a Tower Defense subgenre strategy that tells the story of the confrontation between earthlings and aliens. The classic plot of an alien invasion has found application in this project. Extraterrestrial beings again want to seize the Earth, but the brave soldiers will oppose this. They will bravely fight the invaders to save the planet from imminent destruction. To begin with, the player will go through a short training session in which he will need to repel alien attacks on a small town. After completing the first task, the user will go to larger-scale battles.

Controlling the troops is quite simple - you just need to select a unit and place it on a certain area. It is necessary to monitor the viability so that the aliens do not break through the line of defense. By killing enemies, the player will receive in-game currency, which can be used to upgrade weapons. In addition to the usual turrets, it is worth using the available bonuses in the form of aviation support.

The visual looks pretty good. There are a huge number of special effects and colorful locations. Music plays only in the main menu, since only the sounds of explosions and shots are heard in the battle. Alien Creeps TD is a good representative of the genre that will find its audience of fans.