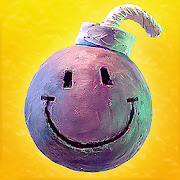 The idea for BombSquad for Android is simple. But for its originality, it is popular with users. One to eight people can play. They are offered a variety of process options - it can be either a traditional flag capture or a deadly battle in slow motion mode.

Most of the world around us looks funny - everything looks like plasticine. Both the graphics and the animation are beautiful. Fights, most often, are hand to hand. Cold steel is sometimes available. Blood does not pour, but this does not cancel the fun of the gameplay. Most fights use bombs.

They are drawn realistically - huge balls of black color with a lit wick. They can be thrown - when they fall, they do not explode immediately, so when dropping a bomb you should calculate the trajectory of its flight and get ahead of the opponent, thinking in which direction he will run. Thus, he can deal maximum damage.

In BombSquad, the world is interactive, boxes with bonuses often fall - they should be collected, this makes it possible to confront the enemy. If the field in which the player is fighting is without a fence, then you need to stay away from its edge so as not to fall, in addition, it can be thrown to the edge by a blast wave. You can play with bots or live web users.