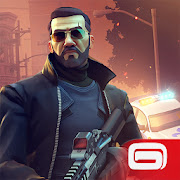 Gangstar: New Orleans - a new part of a series of criminal action movies from the famous company Gameloft. Now the action takes place in New Orleans, the dominance of the underworld which is to capture the player. Choosing one of six characters unlike each other or creating your own, you need to conquer region after district and become the most influential criminal businessman in the city.

No one can cope with such a task alone, therefore, there is an opportunity to put together a real grouping. It is clear that members of the enemy gangs will not just watch how power leaves their hands, and will give a serious rebuff. Even after the defeats, they will not sit back and try to regain their influence, so they can’t rest on their laurels for a long time. The gameplay is canonical for this kind of project.

Free movement on the game map, a huge number of various tasks, shootouts and chases are the standard filling of any action in the open world. Between the main missions, you can explore the territory or arrange lawlessness on city streets, using a wide arsenal of weapons. The graphic component pleases the eye. Comic drawing looks stylish and fresh. Musical accompaniment in quality to match the excellent graphics - there are realistic sound effects and a groovy soundtrack. Gangstar: New Orleans sets the bar for sandbox games on mobile devices and will be loved by fans of GTA and other similar projects.

License:  the cache must be downloaded from google play
In order not to ask for a license, it must be installed as follows:

1. Download the game from the market (entirely)
2. Go to the android / obb / folder and add 1 to the cache "com.gameloft.android.ANMP.GloftOLHM 1"
3. Delete the original and install the mod
4. Rename the cache back (see point 2)
5. Run and enjoy.