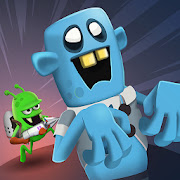 Zombie Catchers is an entertaining arcade game with a plot non-standard for zombie games. The protagonist of the story is the messenger of another planet AJ. With his friend, he decides to build a business to capture the living dead, with whom the planet Earth is teeming. The job is well paid, so the characters are smart and do this dangerous thing.

The main task of the player is to find as many zombies as possible. For its implementation, it is necessary to use a variety of traps, such as nets, harpoons and other devices. For a successful hunt, you will also need a bait on which the living dead must peck. After capturing several instances, they need to be delivered to the base, where the zombies are processed into a variety of products, the sale of which the heroes earn. The money received can be spent on improving hunting tools.

As you move towards success, the characters will come across various types of living dead - from harmless to armed to teeth. Also, at some point, storks, bats and crabs will appear that will try to interfere with the craft of alien businessmen, so you should be prepared for such a turn of events.Zombie Catchers is a non-trivial game that ironizes over zombie-themed projects and will appeal to fans of unusual arcades.